Modern days brides have gone past from typical and age-old Mehndi designs. Now, they choose only those Mehndi designs for the event that resonates with their personality and jazz up the bridal appearance.

A bride can’t afford to take her Mehndi game lightly if she aims to achieve a bridal appearance that has never been attained before. For such a surreal bridal look, Mehndi designs should have to be off-beat and quirky. However, amid the hassle of wedding planning, brides don’t have ample time to find out the crazy Mehndi designs that best fit their makeover.

No worries! We have done the painstaking job of finding off-beat Mehndi designs easy for you. After doing back aching research and getting ingenious ideas from Mehndi Artist in Chandigarh, we have chalked out utterly creative and stupendous off-beat Mehndi designs that will help you attain a sassy bridal look in no time. Let’s get started.

Trust us, this Mehndi design idea will literally give you Goosebumps. Mehndi design with proposal imbibed in it is one of the best ways to make your event stand apart from the pack as well as to give a fresh perspective to your bridal makeover.

Ask your Mehndi artist to draw the image of your dream venue where you are going to be hitched in between the Mehndi design and make your groom flabbergast on the big day.

Include Your Pet in The Mehndi Design

This is something utterly cute, astonishing, and in a way rib-tickling. You will surely going to miss your little fur ball after the wedding. But, including your pet in the Mehndi design is an ideal way to ensure your mushy creature becomes an integral part of your wedding ceremony. Isn’t the idea adorable and super-cute?

Carrying those chunk jewelry items on the big day is quite a daunting task for brides. The best remedy to get rid of those heavy bangles is by having jewelry style Mehndi designs on hand. It is certainly the coolest way to wear jewelry and grab everyone’s attention in the event. You can get the jewelry Mehndi design on wrist, fingers, anklet, and on the neck.

Make sure when you have jewelry Mehndi on anklets and fingers, it doesn’t overshadow the charm of original jewelry.

Do you want to make the wedding day super-special for the better half? Utilize this creative Mehndi design and take your love story a notch higher on the most special day of your life.

In this Mehndi design, all you have to do is writing a special love note for the groom somewhere in the between the design, and has to ask him to find the message in the limited time.

Considering minimalistic Mehndi designs for the big day is an exemplary way to attain a drop-dead stunning bridal avatar without much of a hitch. The intricate swirls around the wrist and beautiful Henna patterns in Mehndi design would definitely make a huge sight for sore eyes.

Here is something exclusive and pristine in the town. Kudos to the social media for giving us hashtags. A hashtag Mehndi design is nothing but the revamped version of traditional Mehndi design in which the bride used to hide the name of the groom which he has to find out.

This trend is going quite strong these days and is at the top of the chart. You can choose to include yours and your partner name in the Mehndi design as a Hashtag.

Though rose patterns were out of the trend a long time ago, when it comes to uniqueness in Mehndi designs, they are still one of the top-notch choices for brides.

The only reason to include this off-beat Mehndi design in our list is that the rose patterns are super pretty.

Once Mehndi designs for soles were quite preferred by brides have become obsolete now. However, to stand apart from the rest, you can choose to have a scintillating Mehndi design for soles for a woahh moment. 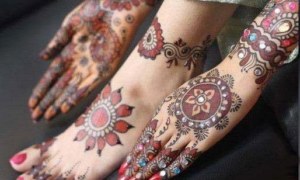