There comes a moment in every tourist’s life when a decision is made to travel around the United States of America and explore its varied culture and customs. Does it also happen with you that although you have heard a lot about the various cities but cannot decide which city to choose for fun vacations in the United States? Keep reading this article then for more information.

List of cities For Vacations in the United States

Yes, that’s right, it’s not New York! Compared to other cities, Philadelphia has one of the most important symbols of American culture, “The Liberty Bell.” Philadelphia played a central role during the war of independence from England, and even today has important buildings and vital places to visit and explore.

Another important attraction of the city, certainly more modern and less high-sounding, is the statue of Rocky Balboa, the character played by Sylvester Stallon who, in modern times, has allowed Philadelphia to be known all over the world.

The city is located in Pennsylvania, halfway between New York and Washington. Travelers can visit the city and explore the main attractions in a single day and are definitely worth a stop on your tour. It is among the best cities for happy vacations in the United States.

Why Boston, you say? Boston is quite a famous and particular American city, thanks to all the British Styled buildings and streets. Here where the American Revolution practically began, today the city holds some of the most prestigious Universities: MIT and Havard.

Boston is a pleasant city where you will find open pubs every night to have a chilled beer and relax with the locals and even watch a game of the Celtics or the Red Sox. Art, history, culture, and sports: Boston has a lot to offer to all travelers, so you cannot exclude it from your tour of the country.

Chicago, the wind city, is one of the critical American towns that does not have as many attractions as New York but is undoubtedly worth visiting. The city that saw Al Capone’s power grow has been able to recover from scandals proudly, and today continues its development by creating valuable urban areas for both residents and travelers.

Know more: 5 Disneyland Parks to Experience Around the World

Once in Chicago, you cannot fail to try their famous Chicago-style deep dish pizzas. It is advised to avoid traveling to Chicago during the winters as it does get quite cold in these parts. The main attractions include Willis Tower, Millennium Park, Cloud Gate, Navy Pier, Art Institute of Chicago, Grant Park, and many more.

With its unmistakable French style, New Orleans is quite an extraordinary city or, better said, magical. Here where one of the most beautiful Carnival in the world is celebrated, there is no lack of myths and legends related to the voodoo religion, a mysterious esoteric practice, is quite popular among the locals.

Despite the scary stories that hover around the city, many voodoos are nothing more than a publicity stunt to attract many occult-loving tourists and travelers.

The city does not end here. It offers many attractions, starting from its mythical French quarter, an area that now seems to have stopped in time.

The best time to visit New Orleans is undoubted during Carnival or during the Jazz & Heritage Festival, the most critical events in the city, but if you can’t in these days, don’t worry, you will always find so much to see. It is a must-visit city for vacations in the United States.

Even fun is essential! Las Vegas is a city like few others globally, which is best known for its luxurious hotels and Casinos. Contrary to what one might think, it is not a city that only the richest can visit: everyone can afford a night or two in a hotel, although you will find a good deal if booked in advance.

The city’s main attraction is the casinos, that in addition to gambling, offer first-class entertainment, with performances by internationally renowned artists.

It is crucial to travel with travel insurance when traveling to the United States of America. The American health system is one of the most expensive, globally, even for a simple emergency medical visit.

Don’t ruin your vacation; travel smart, and have the best vacations in the United States! Now Travel in style using Jetblue airlines reservations options for affordable fares and comfortable traveling.

United StatesUnited States of AmericaUSAVacations
Previous article How to Save On Your Cable TV Bill?
Next article What is mCommerce: Future and Trends of This Technology? 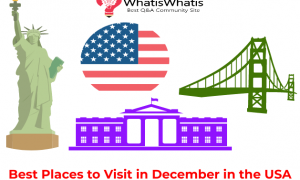 Best Places to Visit in December in the USA