Experts predict that blockchain technologies will be worth nearly $40 billion by 2025. With incredible numbers like that, it’s only natural that so many people are curious about this groundbreaking technology.

But how does blockchain technology work?

It’s both simpler and more complicated than you might think. There are different kinds of blockchains forming the backbone of the cryptocurrency market, after all. But let’s see if we can’t drill down and figure out what makes the blockchain network tick.

Know more: How DApps have Gained Popularity Amidst blockchain Technologies?

What Is a Blockchain?

Put simply, a blockchain is a kind of database. You can set aside Microsoft Access, though; it’s not the same as the databases millions of us deal with at work every day.

Instead, blockchain technology is defined by two key features: the way it stores data, and its decentralization.

First, a blockchain stores data in, well, blocks. Each new bit of information gets its own block which is ‘chained’ to the block before it. This means that information on the blockchain is stored chronologically and in sequence.

You might be thinking: that’s all well and good, but it hardly sounds revolutionary. That’s where decentralization comes in.

A blockchain isn’t stored on a single server. Instead, it’s spread across countless computers across the world owned by all kinds of different people and companies.

That makes it impossible to tamper with. Say you wanted to edit the blockchain you were hosted to say your wallet had a thousand bitcoins in it. You’d be immediately found out because that transaction wouldn’t be present on anyone’s version of that blockchain but yours.

And, because anyone can check out all the transactions on a given blockchain whenever they want, verification isn’t left to distant arbitrators. Anyone can make sure everything is on the up-and-up.

What is Blockchain Technology Used For?

Well, you almost certainly already know about bitcoin. Blockchain tech is perfectly suited to form the backbone of a ‘ledger’ system to record transactions, and that’s the primary thing it’s been used for up to this point.

But as a database technology, the potential applications of blockchain technology are limitless. For example, consider the recent craze about non-fungible tokens. Using the blockchain network, artists were able to generate and sell tokens of ownership for ‘original’ digital artworks.

But that’s not all. Smart contracts could upend how individuals and businesses make and sign agreements with one another. Tech like Chainlink (see here for Chainlink price) could revolutionize the business world just like cryptocurrency revolutionized the financial world.

The possibilities are endless!

Know more: What are the Challenges and Risks that are possessed by IoT & blockchain

The Future is Blockchain

So there you have it, the ins and outs of the blockchain technology that’s shaking up our world. Whether you’re crazy about crypto or just want to sell some original digital artworks, this radical technology has something to offer you. And the innovations it’s making are far from over.

Liked this article? Check out the rest of our site for more!

blockchainblockchain technologyCryptocurrencyWhat Is a Blockchain

Previous article How Do I Start A Career in Modeling?
Next article Innovation in FinTech: Trends and Technologies to Watch 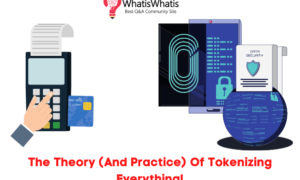 The Theory (And Practice) Of Tokenization Everything!