Leadership is the skill of motivating a team of people in order to act towards attaining shared goals. In proper business settings, it could simply means providing directions to the employees and subordinates along with a well-crafted strategy in order to attain the overall aims and objectives of the firm. But leaders should needs to keep in mind some do`s and don’ts. They should need to avoid those which are not permissible to do all over the world. In given below some biggest mistakes which should be avoided by leaders all over the world are explaining in detail.

Table of Contents hide
1 Biggest mistakes which should be avoided by leaders
1.1 Micromanage the workers:
1.2 Hide in Office:
1.3 Become So much Friendly with subordinates:
1.4 Hire common and ordinary people:
1.5 Uninterested in listening to others:
1.6 Gossiping, Cheating and Flirting with employees:
1.7 Reactive instead of proactive:
1.8 Treat people like machines:
1.9 Underestimate under performing employees:
1.10 Try to solve the problems by themselves:

Biggest mistakes which should be avoided by leaders

Employees always like if they are given chance to participate in the decision making. It contributes a lot in keeping them motivated. But if they are not given such chances and always be neglected so they start searching jobs elsewhere or do not put their extra efforts while performing their job errands. It is the role of the leader to engage their group members in decision making process and give them a chance to speak in order to implement new strategies in the businesses. Moreover, they also gave a proper chance to perform their job errands independently and in the way which they likes to. The leaders should never micromanage their workers and should need to avoid it.

It has been seen that many leaders and managers like to sit in their cabin in isolation and leave their employees independent. They should not need to do it, instead of sitting in isolation they should need to keep their doors open and keep a close eye on their subordinates.

Become So much Friendly with subordinates:

Mingle with employees is one of the most successful techniques which helps the managers to get better work done from their subordinate employees. But it is also necessary that the managers should also need to keep some distances and remain in a professional attitude with them. Otherwise, the leaders will never ever get better work done from their employees.

Another most common mistake commit by the leaders is to get hire common and ordinary people. It will cause much harm to the firm as a whole if the leaders become successful to hire people having outstanding qualities and variety of skills set so it will definitely help the firm to attain its aims and objectives and purpose of existence. Leaders should need to be professional while hiring employees and never ever prefer to get hired the employees on a referral basis.

Uninterested in listening to others:

One of the most common problems of leaders in the 21st century is that the leaders won’t like to listen from their subordinate employees. They just want to give order to their subordinates and never like to take their opinions. Sometimes because of it, the problems of the employees remain unable to solve and due to it the performance of not only the employee itself but also of the entire firm will suffer.

Gossiping, Cheating and Flirting with employees:

It is one of the main common habits seen in the leaders nowadays in present era that the leaders become habitual of creating a casual environment in their workplace and found flirting cheating and gossiping with their subordinate employees. As a consequence of it, the employees always disrespect them and always take their suggestions and orders casual and never try to implement them. Therefore, it is the need of time that they should need to behave with their subordinates in a professional manner.

Reactive instead of proactive:

Try to solve the problems by themselves:

Some leaders become habitual to lend a helping hand to those employees who stuck at some point and they do their work on their own. It will always offer them negative results, by doing so employees become scrims hanker and never try to perform their job errands by their own.

Conclusively, it can be said that if anyone becomes a successful leader in his or her life so it is necessary for him or her to keep these things in their mind and never commit these mistakes at any point in their careers. They should need to be professional and always keep a distance between them and their subordinates. It is one of the most useful tips which help the leaders to lead their employees in a better way and to get better work done form them on time.

Author Bio: This article is written by Ellie Singh. She is a professional article writer and engages in the writing field for the past 5 years. Moreover, he is also offering freelance academic writing service to several students all over the world. If he found any student saying is there anyone who help me to write my assignment for me. Ellie gives them an instant response and offers the best assignment writing services at a very nominal cost. 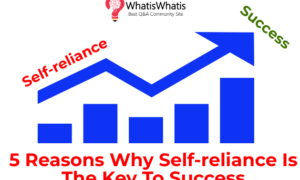 5 Reasons Why Self-reliance Is The Key To Success