When you are looking to make a long term investment in stocks, one of the most important aspects to consider is the longevity of the goods and services provided by the firm in question. It is anticipated that the items will be used for at least the next ten to fifteen years.

The very last thing you want is for consumers to no longer require that product, which would result in the firm going out of business.

Additionally, if you want to earn big profits from stocks over the long run, you need to ensure that you are investing in the expanding areas of the economy and you need to understand candlestick chart reading.

A few of India’s industries, including utilities, mining, and others, were profitable in the past because they were expanding at a satisfactory rate at the time.

On the other hand, a select few businesses are on the cusp of seeing tremendous expansion. These include technology, machine learning, renewable energy, electric cars, and others.

We will talk about the top industries for long-term investment in India for consistent profits, as well as the sectors that are predicted to expand in India over the next ten years. So, let’s get started.

The Best Sectors For Making Long Term Investment In India

Healthcare is rapidly ascending to the position of one of India’s most significant industries in terms of both income and jobs. According to the government, the healthcare and insurance industry includes hospitals, pharmaceuticals, diagnostics, medical equipment and supplies, and medical insurance.

There is an increasing middle class, an increasing number of lifestyle illnesses, a growing concern for public-private partnerships, and a growing interest and FDI inflows in the Indian healthcare sector during the last two decades due to these factors.

A Compound Annual Growth Rate (CAGR) of roughly 22% since 2016 indicates that India’s healthcare business was already performing well before the epidemic and that the numbers skyrocketed following the outbreak.

India can reach $372 billion in revenue by the end of 2022 as India’s healthcare business is predicted to develop at a CAGR of 39% due to an expanding middle class, notably among the country’s younger generation, and an increase in financial literacy.

15-20 years from now, would people still be utilising products like soap, shampoo, surf, and oil? I believe so, too. India’s FMCG industry is the safest bet for long-term investment. This industry’s goods have been in use for over a century and will continue to be utilised in the future.

HUL, Dabur, Emami, ITC, Nestle, and a few more FMCG businesses are household names in India. The vast majority of Indians have been utilising their goods for a long time. In contrast to many others, the FMCG industry’s goods will never go out of style, despite the fact that many other businesses go through cycles of development and decline.

For example, consumers may not purchase a new car or take out a loan during a recession, but the demand for FMCG items may not decline as much as in other sectors since they’re considered essentials. These businesses have recently been expanding into rural and small towns in India.

People in rural regions used to be wary of buying items from fast-moving consumer goods (FMCG) corporations. However, fashion is transforming right now. As a result, these businesses have great potential for expansion in those regions. The FMCG business in India is one of the finest long-term investment opportunities in the country.

Every country is under enormous international pressure to cut carbon emissions due to the Paris Agreement since we are all aware that environmental circumstances are worsening. One of the most attractive investment opportunities is in the field of renewable energy.

Solar panels, for example, are selling like hotcakes, and the cost of producing renewable power continues to fall. India plans to construct 175 gigawatts of renewable energy capacity by the year 2022.

In addition, during the previous seven years, India has spent over $79 billion on renewable energy, resulting in a two-and-a-half-fold growth in India’s installed renewable energy capacity, now standing at over 141 gigawatts.

Manufacturing dominated the 20th century. The internet boom was in full swing for much of the 1990s and into the early 2000s. And now is the moment for the information to be disseminated. IT firms, on the whole, are expanding at a pace much greater than that of industrial firms. Workers in the information technology sector earn much more than their counterparts in more conventional fields.

Many causes are driving the expansion of this business, including advances in technology, economic need, and favourable policies taken by the Indian government (Digital India). According to these considerations, the information technology sector may be expected to continue its rapid expansion. Because of this, long-term investments in Indian IT companies might be considered one of the greatest opportunities in the country.

TCS, Infosys, WIPRO, HCL, and Tech Mahindra are just a handful of the big names in the IT industry that have already built solid brands and made significant profits for their shareholders.

Nonetheless, these firms are still solid long-term investments. Mid-cap IT sector companies, on the other hand, are an excellent choice for long-term investing in India if you want fast-growing businesses with strong upside potential.

New models and facelift versions are being introduced by Indian manufacturers such as Eicher Motors, Maruti Suzuki India Ltd, Tata Motors Ltd, and others in order to meet customer demand.

Individuals’ increased disposable money has shifted their preference toward four-wheelers. Component manufacturers should expect to benefit from the expansion of the vehicle industry.

Moreover, research by CNBC indicates that the global fleet of electric cars increased by 54% in 2017 to over 3.1 million units. By 2030, there are expected to be 125 million electric cars on the road throughout the globe.

As of 2030, electric cars will be the norm for most of the globe (save for India). As a result, if you have an eye on the future and want to make long-term investments in India’s finest areas, you may want to avoid missing this revolution.

What is the first thing you see when you travel to a nation considered to be developed? Large structures, skyscrapers, flyovers, etc., right? Infrastructure development is accelerating at the greatest rate in countries like India that are experiencing rapid economic expansion.

You may have been aware of the constant work that is being done in India to construct new airports, railway stations, metro stations, and so on.

There is no question that the infrastructure industry is one of the most promising areas for long-term investment in India since infrastructure corporations are the most critical participants in developing nations. Some of the most important companies in this sector are L&T, Adani Ports, GVK Infra, and others.

Building wealth for the future may be achieved via long-term investments made in stable sectors. Infosys, WIPRO and HUL are just some of the large-cap businesses that have given their shareholders generous returns.

As a long-term investor, investing in India’s fast-growing industries makes a lot of sense. It’s worth noting that not every economic sector will be gold.

Also know: What are the Technologies Disrupting the Banking and Finance Industry?

Taking the airline business as an example, it began expanding rapidly in the 1970s. People thought it was innovative and predicted it would significantly impact transportation. Airline firms were clearly a popular investment for the public.

Even though the business has grown significantly over the last 50 years, no Indian airline stock has consistently returned a profit or become a multi-bagger.

As a result, diversification is the ideal method when deciding on the finest sectors for long-term investment in India. To mitigate risk and ensure that you don’t lose out on any promising sectors, diversify your investments across various industries. That concludes the topic on India’s Long-Term Investment Sectors. Have fun investing!

Previous article Creating a Logo: 6 Logo Design Tips
Next article How to Export an Inaccessible OST file in any MS Outlook? 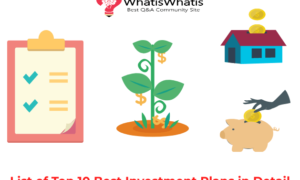