Henna or mehndi has its roots deep in the Indian culture. The practice of applying mehndi to the hands and the feet dates back to more than four thousand years. At that time people used to apply mehndi for its medicinal qualities. Mehndi is an excellent stress reliever and can even ease out hot inflammations. With time mehndi became so popular in India that before any important occasion, all the women wear mehndi on their palms.

Arabic mehndi designs are very intricate in their patterns and don’t cover the skin as much as the traditional ones. Arabic designs are comparatively easy and don’t necessarily require a professional. The patterns are simple, including the lines, dots, flowers, and leaves. You can go ahead and get creative and make a design pattern for yourself.

The main reason behind the Arabic mehndi being so popular is its simplicity and versatility. The difference between the Arabic designs and the traditional ones is that these patterns are outlined with a darker mehndi which looks more eye-catching as they are well defined. We’ve shortlisted the best Arabic patterns that you can ask the mehndi artist in Pune to draw on your palms and legs.

Floral design patterns are quite contemporary and are the first love of every Indian woman. This is the most prominent pattern that you can find in Arabic designs. Floral patterns are very much versatile and can be worn on the legs as well as the palms.

Domes are very much prominent in the Arabic design patterns as they are a symbol to express gratitude towards their own culture. A dome is especially popular because most of the Arabic architectural structures have a dome on top of them and is considered sacred and is believed to represent the vault of heaven.

Lace pattern is really common in Arabic Mehndi art. In this pattern the design is made diagonally on the palm, usually starting from the forefinger and then continue towards the diagonally opposite side of the wrist. At the centre of the palm the design becomes much more defined and at the edges a bit simpler. To finish the look simple patterns are made on other fingers.

Roses are another very popular design pattern in Arabic culture. Rose perfume is highly treasured in Arabic countries and thus it found its way into the mehndi art as well. The rose pattern, when combined with some lace patterns, looks really good in the palms of the bride.

You can further accentuate the look of the mehndi by adding some glitter to it. The glittery mehndi looks really great when worn by young brides. You can pair it up with the glittery makeup and the outfit to complete an awesome look.

You can actually opt for a multicolored mehndi that’ll look really great when you are sporting a casual look. You can either go with some vibrant colors of mehndi or can even keep things simple by just introducing different contrasts. For a contrasting mehndi, most of the henna is washed off which reveals the beautiful stain patterns, while, more henna is applied to other areas to get a deeper contrast.

Miniature design patterns include some of the most intricate patterns. Only a few of the best mehndi artists have the special artistic skills to perfectly make these intricate patterns with the perfection that’ll truly be awe-inspiring for your guests.

These are some of the best Arabic mehndi designs that you can wear at your wedding. We’re quite sure that these patterns will surely invite a lot of appreciation from the guests. You don’t need to stop here with just these patterns. You can wake up your inner artist, and prepare your own design with all the customizations that are really close to your heart. 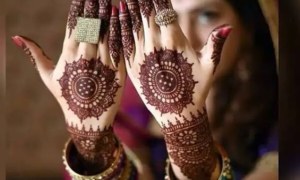 8 Off-beat Mehndi Designs To Give You A Sassy and ...